How to dress up like Queen Elinor from Brave 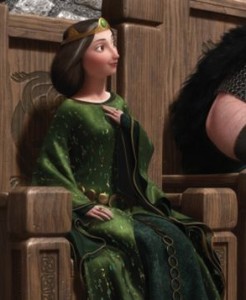 Queen Elinor is cool, calm and collected. Not to mention clever and elegant. All of which makes her a great option for dressing up as a movie character.

And after a slow start, I’m seeing some really great costume creations out there. (At the start, most people focused on Merida costumes instead. Which made sense as they are of the main character, we see her outfits more in the trailers and Merida’s outfit is just a bit simpler to handle.)

Still, whether you want to dress as Queen Elinor for Halloween or to attend a cosplay, you’ll look fabulous. (You can’t miss with this character!) There still are no officially licensed costumes out, but I have ideas for options that you can use instead or even to make your own Queen Elinor costume. 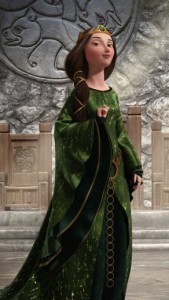 In all the preview images, we only ever saw Elinor in her one green dress. (Which is supposed to be based on Ellen Terry’s famous Lady Macbeth gown.) I guess a lady looks her best no matter what the situation. Makes it easy to decide how to play this one though.

Elegant green shade in the main fabric, very cool and calming. Darker than kelly, leaning toward olive range, actually, with a lot of texture. Makes me think of duponi silk. The color has flecks of gold, blue and maybe a lighter green.

The undersleeve and the skirt middle section are of a darker green, more forest in shade. The undersleeve peeking out is satiny and darker green, and based on some of the images I’ve seen, definitely an undersleeve, not just a border on the edge of the main sleeve. The skirt contrast is solid, but with a jacquard kind of texture to it.

The detail in this dress is mostly the fabric. She does have a dark green edging around the neckline (same color as the skirt contrast) and gold ribbon trim around the edge of the undersleeve. And that’s about all you have to worry about.

Elinor has two accessories – a gold tiara with a green stone and a gold chain belt. The tiara has sections that … wave up, for lack of a better term. From the front, it looks like a crown with points sticking up. But the points are curved and not like what you think of as a crown.

The belt has solid circles around the waist, a huge open circle at the center, then a string of small, fine circles hanging down to a bit above the floor. (I count 14.) Whole thing is worn over the hips and low in the front.

If you wanted to go for more obscure references to Queen Elinor, you have three options. The opening scenes of the movie when Merida is young have Elinor in a simple purple dress, and we see her in a navy dress similar to the green one with her hair worn loose later when she is embroidering the tapestry. Speaking of which, if you’re feeling bold, you could go with Elinor as she changes back into herself – naked under the tapestry.

I tried tracking down green gowns that would work for Queen Elinor. Tough! You have to get the drapey sleeve and the color and it’s just not easy to find both. Bonus now in that there are some out there tagged for cosplay for Game of Thrones that can work as a starting point. We didn’t have those out when Brave first came out. Making it much easier to find the right base for this costume. 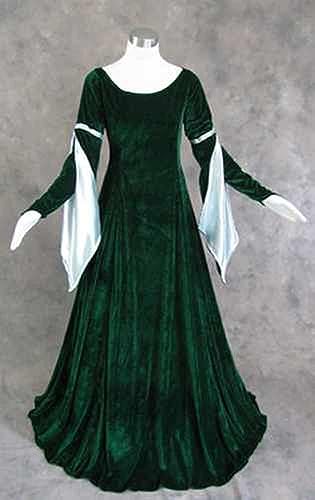 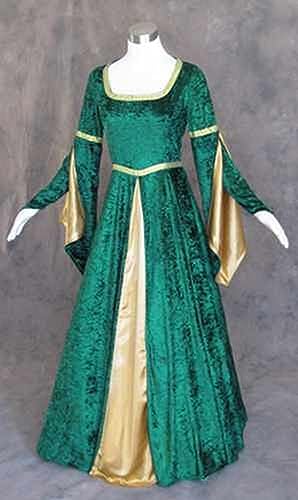 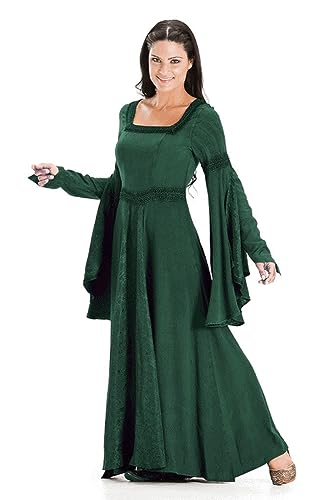 Make Your Own Costume For Queen Elinor

It may be a while before we get Elinor costumes commercially available. And even then, they might not be your size or you might not like the fabric. So here are a couple of options to help you in making your own Queen Elinor dress.

View A looks like a good option as the dress is all apiece rather than separate bodice and skirt. Alteration would include adding the contrasting panel in the front of the skirt and the border around the sleeve edges. Oh, and maybe raising the neckline once you take out the extra stuff there.
Simplicity 4940

The neckline and sleeves are wrong for this, but you could put the bottom half of this one with the top half of the one above to get the perfect combo.

Props: Most Important for Queen Elinor

This one is kind of tough in terms of pieces that would make sense to others when they see you. In the movie, we see her doing things like teaching Merida music, but I doubt carrying around a medieval guitar would help set your image.

Among the things I thought to suggest were some embroidery in a hoop or a small tapestry. You could really work on it or just carry it around. We also see Elinor often with official papers, documents and letters, all made of brown paper. Super easy to do and carry around.

Perfect but potentially messy would be a plate with a piece of cake like the one Merida gave her mother that eventually turned her into a bear. Be sure to stick a fork into the top of it.

The last thing I thought of was maybe a stuffed black bear, maybe even the set of three meant to represent the triplets. 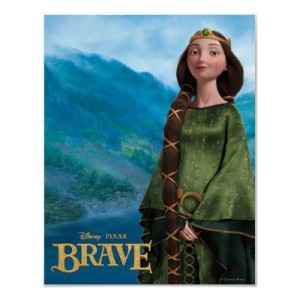 There aren’t a lot of details to Elinor physically. Given the time period, there isn’t any makeup to worry about, other than what you need to get that flawless skin.

Elinor’s hair is a medium-dark brown (call it chestnut) and I have yet to see a picture that shows us just how long it is. Dang. (Although I did read a tid-bit that said it was six feet.) But given the time period, the longer the better, probably. She has a gray streak running through it on her right side, just back from her face. (Mom of a teenage girl, after all!) It is pulled back off her face and bound up in a criss-cross fashion into one long tail with what looks like gold ribbon.

Other than that, I’d suggest making sure you carry yourself with Elinor precision. Glide and always have great posture. There are plenty of costume wigs out there with long brown hair, but none that are long. This one is 40″, which is long enough to bind up well, although still not quite as long as Elinor’s actually is. I would go with Chestnut Brown 6 for Elinor’s hair color. 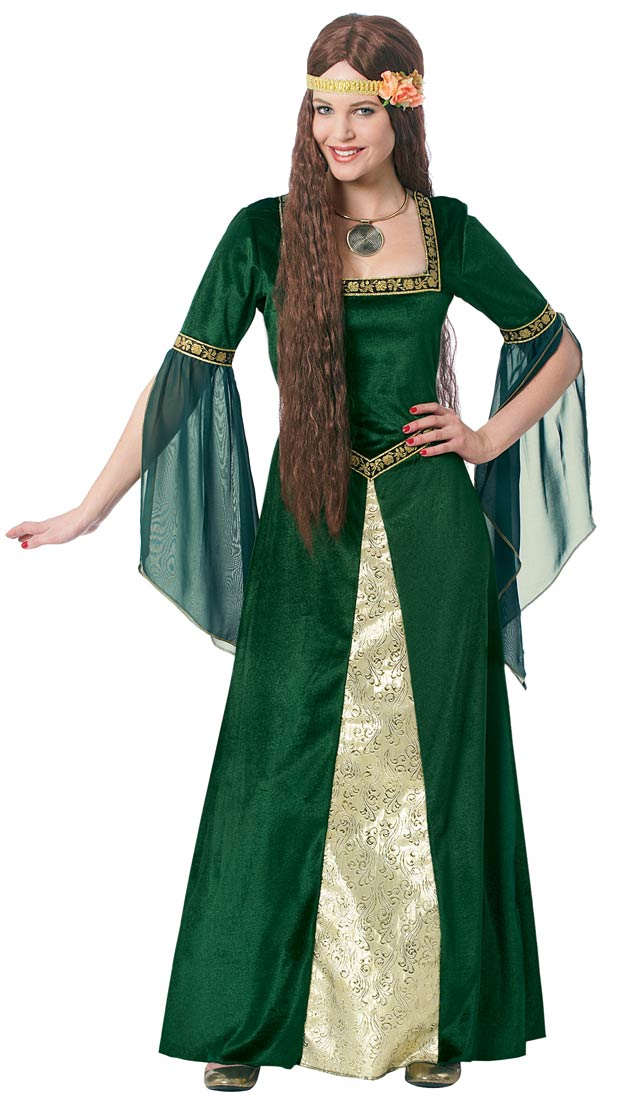