One of the Mardi Gras traditions is to celebrate with a King Cake. In fact, most people wouldn’t consider a Mardi Gras party complete without one. The origin of the King Cake goes back to the festival of Epiphany, which is celebrated in several European countries at the end of the Christmas season. Epiphany represents the three wise men who came to visit the Christ child and bring him gifts, hence the name “King Cake”, for the three kings. In other regions, King Cakes are associated with pre-Lenten celebrations such as Mardi Gras. In keeping with New Orleans tradition, the baking of King Cake begins on King’s Day, at the beginning of Mardi Gras season.

What Exactly Is King Cake?

So now that you know the history behind the King Cake, you might be wondering exactly what it is. King Cake is made from a cinnamon filled dough that is in the shape of a hollow circle. Picture it something like a very large doughnut. The cake is topped with a sweet glaze and sprinkled with colored sugars in the gold, purple, and green colors we associate with Mardi Gras. Purple represents justice, green represents faith, and gold stands for power. Some modern King Cakes also contain various fillings. The King Cake also contains a very “special ingredient”, which is a baby.

A Baby Inside The Cake

Yes, there is a baby in the King Cake. A tiny, plastic baby doll is placed inside the cake as a popular custom (do this by making a slit in the cake after baking and cooling thoroughly). Tradition states that whoever finds the baby in their piece will then host the next Mardi Gras party, or purchase or bake the next King Cake. In other instances, the finder of the baby is considered to be the king or queen of the party. For children’s parties, it is becoming a popular tradition to provide cupcakes decorated as mini King Cakes for each child. Each cupcake contains a baby, so that no one is left out and so that each child gets the chance to be the one to “find the baby”.

The Internet is full of various recipes for making your own delicious King Cake. Here we take a look at a few of those great recipes. This recipe below is from Betty Crocker. 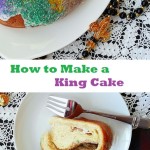 Here are some other delicious King Cake recipes to try:

If you prefer to see the entire cake making process as opposed to just reading a recipe, here are some great video tutorials. The first goes along with the All Recipes Mardi Gras King Cake and takes you through the step by step process.

The second video tutorial is from the Emeril Lagasse Mardi Gras King Cake recipe. Emeril takes you through the whole cake making process while adding his special brand of humor.