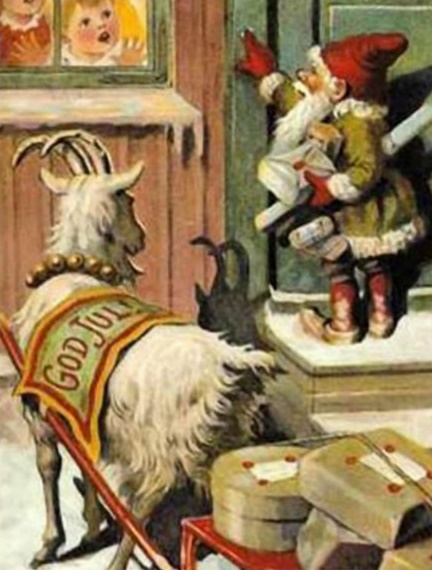 God Jul is How to Say Merry Christmas in Norwegian

Have you ever dreamed of celebrating Christmas in Norway?

Although Christmas traditions in Norway can vary from family to family, most families include customs that have developed from Yule and midwinter festivities in ancient times. Before Christianity, Norwegians celebrated midwinter with parties and feasts to mark the transition from the dark winter to the light of spring and summer.

However, during the 10th century, King Haakon decided that the pagan custom of celebrating Jul (Yule) would be moved to December 25th to honor the birth of Jesus.

How to say Merry Christmas in Norwegian

and other Norwegian Christmas words

The Norwegian word for Christmas is “Jul”. “Merry Christmas” in Norwegian is “God Jul”. You can also say “Gledelig Jul”.

Santa Claus in Norway is “Julenissen”, but is still the same jolly old elf.

Romjul are the days between Christmas and New Years Eve is called Romjul. The Days Leading to Christmas

Preparations for Christmas begin on the first Sunday in Advent when outdoor Christmas trees are lit. In Advent a number of Christmas markets are held where you can buy decorations, crafts, biscuits and sweets.

The tradition is that there must be at least seven different kinds of Christmas cookies on the table on Christmas Eve – so many grab the opportunity to buy the cookies they do not have time to make themselves.

Every Sunday during lilac Advent candles are lit, and every day a door is opened on the children’s Advent calendar. Children’s Advent calendars have 24 doors – one for each day – filled with a small chocolate. Some families create their own Advent calendars they can use every year, with hooks or rings so they can hang one small gift for each day. The Advent gift can then be tailored to fit the child’s age and hobbies. Gifts can be small notes with things you promise to do together with your child that particular day like “Today is Chocolate Cookie Baking Day”.

You can also make a Advent Calendar using a silk ribbon and Advent Christmas mini-buttons.

December 13th is celebrated in honor of Saint Lucy, the young girl who according to legend died a martyr in Sicily. This tradition originated in Sweden then was adopted by Norway in the 1950s. The day is mostly celebrated in kindergartens, day-care centers, nursing homes, hospitals and schools.

On December 13th, there are a number of St. Lucia Day processions, each of which is led by a young girl in a white robe, with a crown of lights on her head and a candle in her hand. As they walk they sing the “Lucia sangen” – the song of St. Lucy. They hand outlussekatter” – yellow buns with raisins – which they have made themselves. 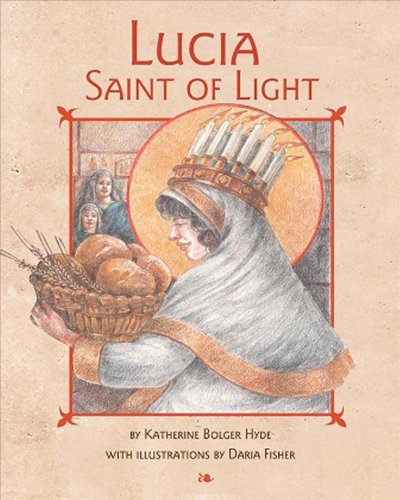 Long revered in both East and West, St. Lucia is an early virgin martyr whose life and legacy shine as a light of faith, hope, and compassion in the darkness of winter and sin. Lucia, Saint of Light introduces young readers to both her life and her delightful Christmas-related festival as it is traditionally celebrated in Sweden and around the world. Daria Fisher’s warm and vivid illustrations will make this book a favorite with children and parents alike. Brighten your home this winter with the festival of Lucia, Saint of Light!

Long revered in both East and West, St. Lucia is an early virgin martyr whose life and legacy shine as a light of faith, hope, and compassion in the darkness of winter and sin. Lucia, Saint of Light introduces young readers to both her life and her delightful Christmas-related festival as it is traditionally celebrated in Sweden and around the world. Daria Fishers warm and vivid illustrations will make this book a favorite with children and parents alike. Brighten your home this winter with the festival of Lucia, Saint of Light.

Many schools help prepare for Christmas

The last day before the vacation starts, the church holds a special Christmas service and many schools attend. 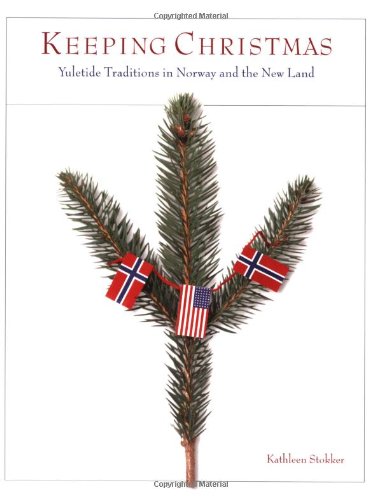 Keeping Christmas: Yuletide Traditions in Norway and the New Land

The modern Norwegian-American Christmas—celebrated with family feasts of lutefisk, lefse, römmegröt, rull, and fruit soup, observed in homes where trees are decorated with straw ornaments, flags, and heart-shaped baskets—is a warm and regenerative family holiday for millions of Americans whose ancestors came from Norway.

Many Norwegians decorate their Christmas tree in the evening of December 23rd. Decorating the house and the tree is done by the entire family.

The tree, a spruce or pine, is usually bought in town or chopped from one’s own forest. It must be fresh and green, with a good shape and thick branches. The tree is decorated with homemade and bought ornaments and a bright shiny star placed at the top of the tree.

It is a tradition in Norway to gather the family and make baskets of colorful paper to hang on the Christmas tree.

The Christmas tree – A Spruce or a Pine

A Norwegian Christmas tree, “juletre” is usually a spruce or pine. While greenery has long decorated homes, the tradition of a decorated Christmas tree came from Germany in the 1800’s.

Norwegians enjoy holding hands around their Christmas trees and singing classic carols, but many do not have enough space in their living room to do so and instead attend Christmas tree parties. A lot of people use this day to lay flowers on the graves of their loved ones.

At 5 p.m. on Christmas Eve, the church bells “ringer inn Julen” (ring in Christmas) throughout the country. This is the real start to Christmas celebrations. Many people attend a church and after the service they return home to eat Christmas dinner.

Before the family sits down to eat, the tradition is to put out a bowl of porridge with butter, sugar and cinnamon for the nisse.

The name “Nisse” probably derives from St. Nicholas. But “nisser” – which are elves (or gnomes) are old figures which existed long before the birth of Christ. There are several types of “nisser” in Norway. The most known is the “Fjsnisse” which is a “nisse” who takes care of the animals on the farms. The “Fjsnisse” is very short and often bearded and lives in a barn or a stable. He wears clothes of wool and often has a red knitted hat. The “Fjsnisse” often plays tricks on people.

Sometimes he will scare people by blowing out the lights in the barn or he will scare the farm dog at night. You can hear the dogs bark. He can become very friendly with the people that live on the farm, but one should never forget to give him a large portion of porridge on Christmas Eve – or else he will play tricks for example move the animals around in the barn, braid the horses’ mane and tail, and other tricks like that.
Of course we also have a Christmas nisse (julenissen) which in most homes is more or less identical to Santa Claus. The “Julenisse” brings presents to all the nice children on Christmas Eve. He is not as shy as Santa though, since the “julenisse” delivers the presents himself. He does not come down the chimney in the middle of the night. 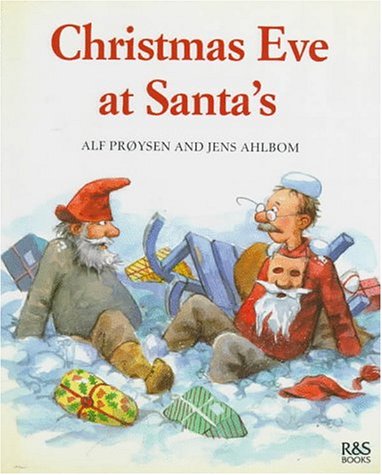 On Christmas Eve, Carpenter Anderson exchanges places with the real Santa Claus and sets out with his tools to make presents for Mrs. Claus and their four children.

The days between Christmas and New Year

In the days between Christmas and New Year’s Eve (romjul) the children sometimes go from house to house in the afternoon asking for sweets. This tradition is called going “Christmas buck”, Julebukk. Julebukk is similar to Halloween.

Christmas dinner is a family event

For many people, Christmas dinner is like a family reunion. Grandparents, parents, children and sometimes aunts and uncles gather around the table.

Christmas dinner varies throughout the country. In the ‘old days’, Western and Northern Norway used to have Pinnekjtt (salted and steam boiled ribs from lamb) served with potatoes, because many in these parts of Norway lived on farms or in rural districts with plenty of sheep available. They often lived close to the sea and ate fish more than once every week, so fish did not have the “Christmas-Eve-special-food-feeling”.

In the Eastern parts of Norway pork was common, while in other areas, lutefisk was the main dish as well as cod, salmon or halibut.

Recently, more people have started having turkey and pizza for Christmas. This is accompanied by mineral water, water, wine, beer or aquavit.

Christmas comes with special meals. Families treat children to special rice porridge. At Christmas, an almond is hidden in the mix. The child who discovers it wins a prize.

Julel is a special Christmas beer.

The shops start putting up their Christmas decorations early in November, and you can buy candy with Christmas themed shapes from September, but the big rush to buy presents doesn’t start until early in December.

Shop-bought presents have gradually replaced the homemade presents that used to be common, but many add small homemade gifts like a mug and homemade sweets or cookies. Many also buy Christmas gifts for their pets.