Turn yourself into the ultimate Amazon princess – Wonder Woman 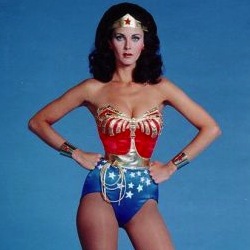 For Halloween, costume party or just plain old fun, the Wonder Woman mystique is really strong. So go for it! It’s the ultimate woman power outfit – no matter how skimpy.

I’ve gathered my favorite Wonder Woman costumes from lots of different places for women, choosing the ones that I thought gave you the most authentic look overall. Fortunately, her outfit has changed a lot over the years, so there’s some variation. I even found a costume that uses the new Wonder Woman outfit. The one with the pants, not the 52 version. Which I can’t find at all. Boo.

But maybe you want to put together your own costume from scratch. I’ve tracked down items to help you do that as well with ideas on how to do it. So get to it and have some fun!

From the sexy to the sublime

Interesting to me how many of the options out there come as a skirt. Now, she had a skirt in the very original comic books, so that’s authentic, just not what most of us think of for this costume. Then again, they’ve gone to tights for the latest version, so whatever.

This first one here to the right is one of my favorites, mostly because it’s a complete package. You get the headband, cape, dress, arm bands and boot covers. The covers to me are the best part because you don’t have to go buy special shoes, but just use some you already have. Plus, I tend to like the skirt. I can deal with the strapless part better than I can high-cut shorts!

This version also comes in teen, girl and toddler sizes, although with straps for teens and a full top for the younger girls.

Recognize this next one? Well, yes, OK, it’s Wonder Woman. But the specific costume?

Yep – it’s the exact one Penny wears in that New Year’s episode of The Big Bang Theory where the gang (with Zack as Superman and poor Raj as Aquaman) wins the group costume contest at Stewart’s comic book shop with their rendition of the Justice League.

Of course, Penny can carry this one off with the bathing-suit-type bottom, and maybe you can too.

This particular version of a Wonder Woman costume includes everything you need with the headband, cape, leotard, belt, lasso, bracelets and boot tops. Love that it comes with the lasso as an accessory, which most of these don’t. (Of course, I think the lasso is one of WW’s silliest accessories, but whatever.)

There is a kids version of this one – just a little less sexy, of course – that I like because it’s so close to authentic.

This sexy corset version is new to me this year. (And yes – I realize it’s not the most authentic. But it’s adorable.) Again, I kind of like the skirt as a practical matter. Unlike the others, it comes as two pieces – corset and skirt – instead of a dress or body suit.

The gauntlets – not so sure about them. They’re just huge!!! (They’re definitely taken from the 52 universe costume, but nothing else is, so whatever.)

Oh, and it’s also worth noting that this style doesn’t include boots or covers. You’re on your own as far as footwear goes. She looks cute with the black heels, but if you’re looking for any kind of authenticity, not the best choice. (Again, the costume isn’t super authentic, so it probably doesn’t matter that much. Wonder Woman can kick butt in heels too.)

I found this last one over on Amazon and, frankly, it probably comes the closest to what those of us who grew up with this show remember since it doesn’t include a cape.

It’s definitely a sexy option and one I’m not sure I’d be comfortable wearing out in public. Your mileage may vary, of course.

It comes with what they’re calling a pull-up romper – which sounds awfully childish to me – lasso and headband. All they’d really need to do with this one is change the gold lamé to silver and we’d be getting close the the DC 52 version.

Get a Costume with the New Wonder Woman Look

The newest Wonder Woman outfit design has dropped the jacket (if you’ve seen screenshots from the TV pilot, you see her running around without it), although this costume option still has it. You could keep it just in case it gets chilly or go without it altogether to be more “authentic”.

It’s worth noting that this is definitely patterned after the initial sketches before fans caused a huge uproar about things like the jack and the boots. (In the first outfit from the TV pilot, her boots were the same bright blue as her pants. Seriously.) The set doesn’t come with shoes or covers, so you can deal with the red boots as you see fit.

Woman Costume – Boots, wigs and more to complete the look

You wouldn’t believe how many red boots are out there!! (Well, maybe you would if you were in to shoes.)

There are a lot of different variations out there billed as fitting for this costume, but the ones I like the best are the set here. They have the white stripe (as opposed to gold trim like others) and aren’t too ridiculously high in the sole and heel. Gotta run to chase those bad guys! I’ve seen others that are very similar but super high heel and the boot comes up to the thigh. Ummm, no.

You can get the headband/tiara separately, but I really like the combo of hair and headpiece in the Wonder Woman wig pictured to the right. If you don’t have the right color hair or it’s shorter like mine, it covers all your bases in one. (And then you don’t have to fix your hair. Bonus!)

(Side note: I believe the model in the pic is wearing the first costume featured on this page, in case you were wondering. You can see the straps on it that are available on the teen sizes.)

Ha! The lazy way around a costume for sure. And the super modest.

But not necessarily the cheapest, just so you know. You’re halfway to a real costume by the time you get the caped t-shirt in the first picture. Still, if you’re looking for quick and easy, this is probably the way to go. This style also

comes in a kid size and a baby onesie, which might also be a good option as the shirt is liable to hang tough with daily dress-up play better than most costumes.

You can also get a non-cape version, although only in adult sizes. It has the benefit of being a little more practical for every-day wear as well. It’s not exactly the same as the first, as you can tell. It’s a crew neck, the belt points up, and the stars are outlined in black.